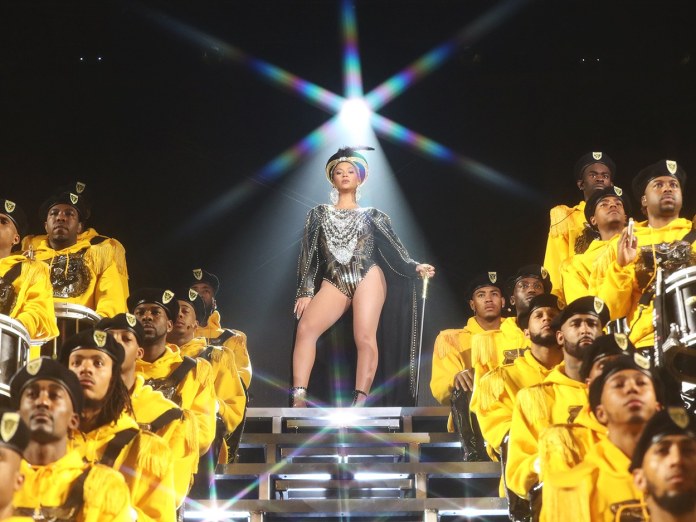 I’ve been aware of her, who hasn’t? She’s the world’s biggest pop star, a celebrity icon. Except, I hadn’t paid her much real attention. And so Beyoncé’s reification by fans and her cultural significance had mostly passed me by.

I loved ‘Bootylicious’ by Destiny’s Child, of course, had the single with three remix versions. The rhythm was original, and I liked the defiant statement about the more voluptuous female form. And ‘Single Ladies’ couldn’t be ignored. ‘Crazy in Love’ was infectious. But other songs which briefly came into focus didn’t grab me.

Maybe I hadn’t been trying hard enough. This thought occurred to me when I started reading headlines about Beyoncé’s recent performance at the Coachella music festival out in the Colorado Desert. People were comparing it to Jimi Hendrix playing the Monterey Pop Festival. That Beyoncé at Coachella was a defining cultural moment for African-American women; to be remembered for generations.

OK, perhaps I needed to dig deeper here. So I went to YouTube and found some clips of the performance. It’s great theatre. Beyoncé first appears in an Egyptian-style outfit, looking like the famous bust of Nefertiti, the wife of a long dead and forgotten pharaoh. She then emerged at the top of a pyramid of stacked bleaches (the American term for a temporary stand) wearing a yellow sweatshirt, ripped denim shorts and fluffy white leggings that recalled those worn by Zulu warriors.

In the context of the Coachella festival, attended mostly by well-off middle-class college kids and faux-bohemians, Beyoncé presented the sights and sounds of southern black colleges, especially the marching bands and dancing that accompanies college football games.

The cultural lessons didn’t stop there. Scattered all through the performance were references to African American culture and politics, from the iconic song ‘Strange Fruit’ (about the lynching of black men) to the words of Malcolm X: “The most disrespected person in America is the black woman.”

The whole performance was identity politics ratcheted up to the highest level. Black pride, women’s pride, that was the message. Delivered as extravagant entertainment to the festival audience, but more importantly to the millions around the world who watched the lifestream or who’ll access the performance on YouTube.

It’s only pop music, but the symbolism, the codes, they matter, Beyoncé would undoubtedly argue. As they probably do to unknown women of colour in Atlanta, Illinois and Chicago. The women disrespected by white America, and also often by black men. You only have to have a cursory awareness of the history of hip-hop to know the sexism and misogyny that’s part of the culture. And we know the impetus for Beyoncé’s last album, Lemonade, was a response to husband Jay-Z having an affair, the ultimate act of disrespect, which she turned into a symbol of women being disrespected by men down through the ages.

Beyoncé is consciously walking in the shoes of many African American performers who’ve communicated black pride, touching on arrogance. When Beyoncé sings, “I just might be the black Bill Gates,” she echoes Muhammad Ali yelling “I’m the greatest!” Ali, summed up this attitude, this incision into American and global pop culture, with what he claimed to be the shortest poem ever written, which went, “Me. We.” It’s a sentiment Beyoncé would agree with.

Because I’m a white middle-aged man with a comfortable standard of living, I can’t totally identify with what Beyoncé’s selling. Still, I’m going to find a copy of Lemonade in The Warehouse bargain bins and give it a listen with fresh and more educated ears.