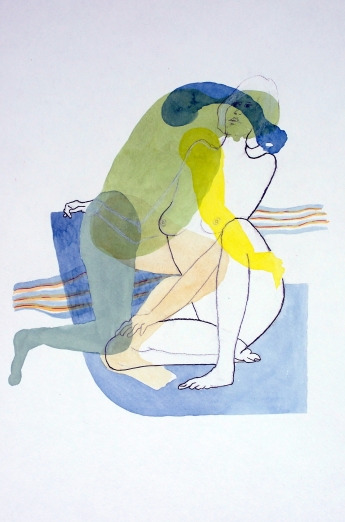 Two figures, one female, the other, given the shape of the shoulders and arms, must be male. The woman is drawn in outline with charcoal and pencil. The masculine figure is composed of blocks of five colours, painted in thin washes of watercolour paint. It’s like he’s wearing the costume of a circus acrobat, like Picasso once painted.

The woman is seated on a blue couch, her legs tucked up close to her, one hand on the armrest and the other on her thigh just above the knee. She’s is posed, as women have posed naked in art for centuries, as objects of desire and beauty for a masculine gaze. Except, her head leans back slightly, unnaturally, which undermines the attempt at holding a relaxed position on the couch. There’s a tension in the pointed shoulders. It’s awkward. Made more so by the looming figure of the featureless male that overlays the woman.

Is it a loving embrace he’s trying to give? Or something else? The blue arm with a clenched fist passes through the woman’s face like a comic-strip punch. The dull green head bends over from the torso in what looks like despair or regret. Yet as we’re focusing on the male figure, the green head highlights the features of the woman’s own face, the blue arm highlights her eyes. The artist cleverly brings our attention back to the woman, who always remains at the centre of the picture, seemingly in control.

What is the relationship between these two figures? Their overlaying suggests a disjunction of time; they’re not in the same place together. Has the women removed herself from the relationship? It’s the male figure that is active, encroaching into her body space, but he’s getting no reciprocal response. She leans back calmly, possessed of an inner integrity, her hands remain in place. Even though the male figure is blocked-in with colour, the lines of the woman can still be seen, rendering him transparent. He’s a ghost, a shadow, his position on the couch impossible in real life. He invades the picture, but he doesn’t dominate it.

This painting by local artist Anneke Muijlwijk has a sad beauty that speaks to me of the transience of human relationships, which very rarely exist in a perfect now. The novelist Leo Tolstoy once said that what was interesting about a man and women getting together was not the romance and entanglement leading to marriage, or that kiss that concludes today’s romantic comedies, but rather what happened afterwards. That, he thought, was the source of drama which made for a good story.

It’s not easy to suggest a story in one image composed on a piece of paper. Muijlwijk has achieved this and left me speculating at the possible drama. It holds my attention like few artworks do. Its success comes from a balance between mystery and a concrete grounding in real human emotions. I can identify with both figures. We’ve all been each of them. That universality cuts to the core.

More of Anneke Muijlwijk’s paintings and drawings can be viewed on her website: http://www.annekem.co.nz  Or look out for showings of her works in Whangarei’s local galleries.