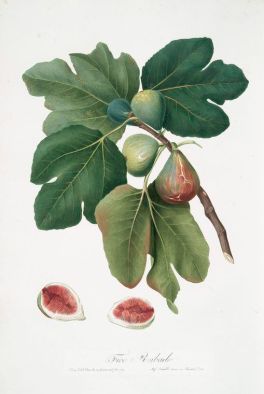 These last few years I’ve been trying to transform my Hikurangi section into a little piece of the Mediterranean (deluded I know) by planting olive trees, oranges, lemons, grapes and figs.

It’s the figs that have been a revelation. I’m almost embarrassed to admit that I didn’t eat a fresh fig until I was over 40. It’s not a fruit that had broken into the mainstream of New Zealand fruit eating. This probably has something to do with the fact that figs don’t last long once picked from the tree, which is no good for supermarkets that have so powerfully shaped our eating habits.

The first fig variety I planted, purchased from an orchard on Apotu Road, had a red flesh and earthy sweet taste that got me hooked. I’ve subsequently planted another variety with paler flesh that has more of a honey flavour.

There’s definitely something sensual about the lush juiciness of a perfectly ripe fig. Rather than the apple I reckon it must have been the fig that was the forbidden fruit in the Garden of Eden. I just don’t find a hard crisp apple particularly sexy.

To me the fig is a fruit that fills your tummy like a banana. Perhaps that’s got something to do with their soft texture combined with a high fibre content. I’ve been eating them in salads and on toast with cream cheese for breakfast and lunch. Divine. They’re also particularly good on a pizza.

Fig trees grow quickly and fruit in their first year, so you get instant gratification (unlike the walnut tree I planted, which I’ll be waiting 10 years to eat my first nut).

In searching for info on figs I found out that the fruit is not strictly a fruit at all, it’s a receptacle for the flowers, which bloom internally. Old varieties of figs used to be fertilised by a fig wasp via a small opening at the base of the “fruit”, but modern cultivars are able to fruit without fertilisation; a mysterious process that encourages another biblical allusion, to the immaculate conception of the Virgin Mary. Another oddity is that they can fruit twice a year if the conditions are right, once before Christmas and then the main crop in March and April.

Figs have no major pest problems, that is, except birds. Unfortunately I have a gang of sparrows that perch themselves in a nearby totara, eyeing up the figs for when they reach their perfect sweet ripeness. They ravenously peck out the flesh, leaving the massacred remains of the fruit dangling from the tree.

Northland has the perfect weather for growing figs, and they’ll grow in even poor soils. You just need to apply mulch around the base of the tree and perhaps some lime once a year. They need a good amount of water to get the best harvest. This summer has been perfect.

I’m hoping in a few more years the first tree I planted will be big enough to sit under, perhaps I might achieve some enlightenment in the process, like the Buddha did under the bodhi tree, which apparently was a very old and large fig tree.