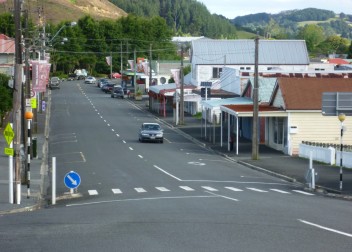 I was surprised to read the headline the other day that house prices in Hikurangi had risen 20%. According to real estate agents this was catch up for years of being undervalued. It seems like that old joke about Hikurangi being the “Ponsonby of the North” might finally be coming true.

Well, I’m all for good cafés and quality (but inexpensive) restaurants opening in my hometown, but I’ve no desire for Hikurangi to change too much. I’ll like its unpretentiousness, its working class history that’s evident in the modest houses, the remains of the old dairy factory and stories of a coal mining town. There’s a feeling I get in Hikurangi of being on the outskirts, separate from the mainstream, marginal. It hasn’t been fashionable to live here.

And I guess that’s the problem I have with Hikurangi being absorbed into the runaway housing market and now in the sights of Auckland property investors. I’m afraid something of the character of the town will be lost.

Which for me is what has happened to Grey Lynn, Ponsonby and other inner city suburbs in Auckland. The poor artists, the struggling musicians, the students, the weirdos and low income people have been pushed out. That’s not something I wish to see happen to Hikurangi.

A little while ago I wrote a prose poem that included some of the things I loved about the town I’ve lived in for 16 years. At the risk of romanticising Hikurangi and attracting more people to buy up the real estate, here it is…

Lovin’ the liquidambar next door, the red leaves that fall down on us.
The railway track over the fence, which you can look down both ways to a vanishing point.
The four damn churches; the toi toi in bloom, with the morning sun shining through like a halo, blessing us all.

The view of town when you come over the top of King Street: looking like the wild west.
The Hikurangi Hotel with its dark wood interior, pokie machines and whale’s dick over the bar; the Saturday night bands with their names in chalk.
The guy who wears overalls, who crosses the road at the same place everyday with his two dogs, who gruffly says hello.
The reggae that blasts from the house three up from ours.
The dairy, its cracked blue ceramic tiles and corner relief of a bull’s head; the Four Square that sells ready-made vegetarian curries.
The miner’s cottages and villas; the eastern hills with chopped down pine, gorse and scrub, so that it’s not picturesque.
The crossroads 6.7km out of town, where you can stand in silence.
The old stone path that gets covered in leaves, broken glass, cigarette butts and tinnies.
The young scruffies outside the Ruraltec talking about cars, girls and Xbox.

The primary school, the old classrooms in winter when it’s raining and the heaters are on; being 7 years old.
The dump and its growing piles of usable junk, the cheap framed photos on the fence, the bending of the rules.
The lake, the dragonflies flying low across the water and kids doing bombs.
The limestone rocks that tourists used to visit.
Because there’s room to imagine being somewhere else.
And our hill, the hill that Ngāpuhi forgot.