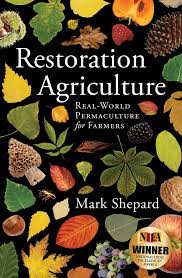 Plant trees, trees and more trees. That should be one response to climate change and the world food crisis according to Mark Shepard, the author of Restoration Agriculture (2013). This interesting book (available at the Whangarei Public Library) is based on Shepard’s experience of implementing permaculture ideas on his 106 acre farm in Wisconsin, USA.

The first chapters layout the problems with dominant agricultural practices, what Shepard calls “the agriculture of eradication”―the eradication of eco-systems, species diversity, precious water supplies and soil vitality―the result of an over reliance on annual crops and a global food economy that encourages monoculture farming.

To maintain profitability the trend around the world has been for larger farms and plantations that use a cocktail of chemical sprays and artificial fertilisers, and require extensive fossil fuel inputs. I recently visited a farm in South Canterbury. There was one farmer, plus at least five large petrol guzzling vehicles, along with numerous other mechanised technologies, including massive irrigators spanning the land.

Faced with the ultimate dead-end of industrial agriculture, Shepard says we should act now in our backyards, on our farms, in the abandoned spaces of our urban and rural environments, to transition to a perennial agriculture that he says can feed the world. He argues that extensive planting of fruit and nut trees combined with rotational livestock management can surpass the calorie returns of growing annual crops of rice, wheat, corn and other grains (large quantities used globally to feed animals).

As much as possible―given the limits of climate and geographical location―Shepard believes we should aspire to replicate the savannah-type ecosystem: trees and shrubs, spaced with open areas of grass for a range of animals. Our main domesticated animals (sheep, goats, pigs, cows, poultry, are all originally savannah animals). Savannahs support more life by weight than any other environment.

The fruit and nut trees not only supply food, but also maintain water in the land. Rain falling onto trees hits leaves, where some water is absorbed, before dripping down through the canopy to a ground rich in organic material, which absorbs water rather than seeing it run off the land or simply evaporating. Combined with the animal manure that’s no longer washed away into rivers and creeks, you’ve got a living soil with essential minerals maintained on the land. And trees of course remove carbon dioxide from the atmosphere, vital if we’re going to prevent the worst extremes of global warming.

There’s a lot of detail in Shepard’s book, but the basic principle is that we need to revolutionise food production by striving to imitate nature and create living eco-systems.Shepard believes that we can’t wait for governments, and in his words “we can’t relinquish the revolutionary power of one and wait for a hoped for perfect organisation to form.” Planting trees is something most of us can do.

There’s still money to be made from “the agriculture of eradication”―but only for so long. Then the land, the communities, will have to be healed. That process, however, can start now with the digging of every hole and tree planted.